I have been looking forward to getting my braces off, probably more than getting my thesis approved! Everyone was loudly proclaiming their praises at me since I was getting debanded today. There was also a young boy there getting his braces off, so the orthodontist was really busy. Not only were they working hard with the patients, they were in the process of making it to a Damon convention.

The orthodontist came over and looked at my teeth. I was hoping he wouldn’t say, “Hmmm..not yet! We need to leave those little suckers on longer!” But he didn’t! Yeah! So the assistant started opening the little doors of my braces to get the top wire out and the little doors were all a real pain to get open!!! Then she says, “Look!” I look down and she’s holding all the brackets still attached to the wire. I couldn’t believe the top ones were all gone. I pushed my lip down and sure enough, all gone, except for a molar bracket on each side. She told me she’d tell me about that later. Then she went to take off the bottom ones (I knew that she wasn’t just opening the little Damon Bracket doors).

The bottom one’s HURT when she popped them off. Just thinking about it makes me cringe. <shiver, shiver> Sanding process next. I kept trying to place the scent and then it hit me, “burning hair!” Pee-eew! Tooth after tooth followed by that nasty burnt hair smell. Then the orthodontist came over and sized the wire for my bonded retainer on the bottom teeth. In front of me appeared those dreaded lip spreaders. I could hear the music from “The Good the Bad and the Ugly” in my head as we faced each other. Obviously the lip spreaders won because they were placed in my mouth before I could prepare myself.

There is one assistant that was there when I got the braces on and my sister and her joked about my appearance with them in. So, this time she came by with a mirror and said, “Hee! Hee! Here’s whatcha look like!” Being teased wasn’t bad, in fact, I always play along, except this time the room was full of kids there for adjustments and one little girl was eyeing my teeth. If that wasn’t bad enough, the orthodontist was busy with the other deband and I was in those lip spreaders for, what seemed like 20minutes—–with that girl and the other onlooking kids! The ortho finally came over, glued the retainer on (Oh, I didn’t mention that I had etchant on my teeth the whole time?)

Then, to my surprise, they prepared the top bonded retainer!!! I didn’t think I would be getting a bonded retainer on top. At my consultation I was told I would be getting an Essix retainer on top. I think I still might next week. Anyway, the top one was placed and after it was all over, I realized I was lisping from all the glue in the back of my top teeth. I had an acting scene 2 hours after my appointment too! They gave me a mirror and I could not believe my eyes! They’re so….flat and huge! The brackets made them look smaller to me. WOW! Just like I had to get used to the brackets, I am going to have to get used to having none.

So, back to those molar tubes. The assistant told me that she was going to put hooks in them and then I would wear an elastic across my top teeth, kind of like the way a Hawley wire goes across the front of your teeth, except this was an elastic stretched across the front. Then I heard, “Did you get the music?” Then the music in the office swelled loudly. They were playing some 50s song. I can’t remember what it was since I was so excited to have my braces off. The 16 year old was too embarrassed to dance as the assistants told us to, but my pride had already been drained after the “lip-spreader onlookers” so I danced away.

Then they gave me a gift certificate to a photography studio (they get one to hang in the office), the movies, and a big sport bottle full of sticky candies (tootsie rolls, 100 Grand bars, Dots, etc..) with balloons attached.

When I got back to the school to do my scene, no one noticed my lisp, that I thought was so noticeable, or the fact that I had no braces. My scene went fine and only afterwards did someone notice. Then everyone came over to get a look at my smile. HOW WONDERFUL!!!! I am so happy that my sister convinced me to get braces a year and half ago when she did! It has been so life changing! I loved the suspense of waiting for 18 months to see what my teeth would look like. I only wish that more people could have the opportunity to get braces if needed. It’s so much more than just and aesthetic change! 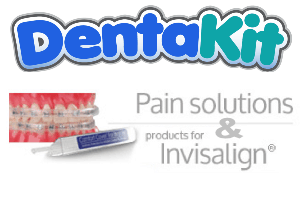 For Oral Hygiene On The Go!

Get News & Info from ArchWired!